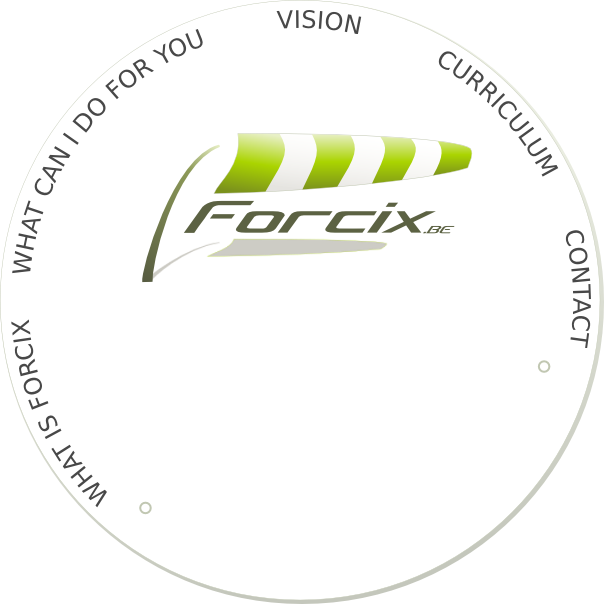 X
In sailing terms, force six is a strong wind that will make a boat go at maximum performance.
It's not yet a storm, but at force six, only experienced sailors rig their boats.
Forcix was created with this idea in mind; To provide your company with a strong wind of new energy and ideas to get your IT projects on track.

What can we do for your business?

X
Looking to re-design your storage architecture? Need fresh ideas on your data management strategy? Forcix will help you orient your strategy to the future

X
A business needs a vision, vision is a friend; A simple rule of thumb you can return to when facing challenges. Or just something something nice to believe in.

I'm positive minded, I see problems as a challenge, and embrace the extra mile to resolve these. I take pride in delivering a project 100% complete and on time. I'm self-motivated and eager to learn new things. I'm creative, communicate easily and function well within a team.

In general, I have a broad knowledge of programming and scripting languages, platforms, storage systems and data protection. I have experience both on the software and hardware side of the data management environment.

These are trainings I delivered as teacher

These are trainings I attended

Datacenter technologies was a Belgian software company acquired by Veritas weeks after I joined the company. A few months later, Veritas merged with Symantec.

As a software engineer I took responsibility of 2 core components of the PureDisk product. Tasks involve adding functionality, but also improving stability by increasing the number of tests (both unittests and systemtests), gradually replacing untestable or ambiguous code by code that is clear, tested and documented. I also worked on improving the in-house buildsystem (both on windows and linux) and created and maintained a packaging and installation tool for product patches.

The role of Customer Focus Team (CFT) engineer is a last line of defence type support role. Our team of two had 3 main lines of responsibility:

Training: At each release, We visited the support centres to provide training for the more advanced lines of support. We wrote the training sessions and a support handbook for the product.

Firefighting: In critical support cases, we went to customers to troubleshoot problems onsite.

Programming: we debugged software and wrote patches, managed maintenance packs and performed supporting engineering at most layers of the product.

Apart from that I also wrote and maintained a testing framework to simulate high load on the product over longer periods of time. In this position, I developed strong debugging skills and a good knowledge of different programming and scripting languages. I also learned to understand the value of good user interaction and logging

As a support engineer for Symantec's Netbackup division, I assisted the launch of a new Netbackup product. My role in this position was to test the product for stability, prepare documentation and training for the callcenters who took on support for this product. I also provided support to the pre-merger Datacentertechnologies customers on the DC-Protect backup solutions. These products were content addressed disk-to-disk backup systems running on diverse linux platforms. Not only has this position provided me with a strong and broad knowledge of the linux operating system, it has also taught me the day-to-day use of SQL (postgresql and mysql), bash scripting, PHP and many other open source-related techniques.

As a server support agent I solved technical problems with HP enterprise hardware (HP Netservers, HP Proliant servers, Backup devices,…) over the phone. Performing this job I’ve gained more in-depth knowledge of server hardware, and the hardware standards (such as PCI,SCSI,IDE). I’ve also needed to use and improve my OS knowledge on a daily basis. In many cases troubleshooting requires going through logfiles, analyzing the boot sequence, checking (driver) modules and kernel configuration.

As a helpdesk support agent I provided technical support for end users on the windows platform.

1997-2011, I was part of the management team of a local land yacht club. The management team consists of 4-7 people. As a team we promoted the sport in Belgium and encouraged young people to learn it. I was president from 2009 – 2011. We organized several events such as large international regattas, barbecues and parties. We are also proud of being the first land yacht club ever having organised an international regatta for youth only.

This was a fun thing to do, but also a very good way of learning basic management skills, Motivating people, dealing with colleagues, with money, and selling a product.

This is an hCard.